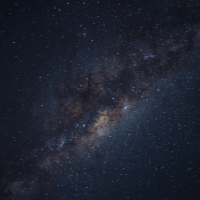 “Get in!” a gruff voice answered my knock. I stepped in. I was now in the observatory!

“Wow,” I breathed. It was amazing! Stars dotted the sky like streaks of white paint.

“Can yer shut up!” the annoying voice interrupted my thoughts.

Before I even finished my sentence, I was interrupted again by a shill, plain evil, “Mwa Haa Ha Ha Ha! Mwa Ha Ha Ha Ha Ha!”

I recoiled in shock, thinking that my teacher had finally gone insane. He waved his hands around as if signaling someone.

I started to feel uneasy, and my heart was skipping a beat. What on Earth…I turned around and ran for the door.

I tried for the windows.

I tried to jump off from the balcony.

It had turned into solid glass.

I looked at Mr Whata. His eyeballs were bulging out. His face was turning whiter and more…decomposed. His hand was reduced into a skeletal structure. He stood there, as if nothing happened, staring out of the window, waiting for something.

I couldn’t suppress my scream. It scared the birds out of the trees, but no one came running.

“I was waiting for that.” My insane Astronomy teacher flashed me a crooked smile, giving me an unpleasant look of his empty, disgusting eye sockets.

My legs wanted to collapse as he waved his hands. This time, the ground shook, and everything changed.

Trees grew around us.

Rocks grew out of the Earth.

A mist appeared around us.

I could see the rotting flesh.

“Um…Mr. Whata?” I wanted to puke, my greatest fear was in front of my eyes! No, I couldn’t scream, can’t scream, I warned myself.

Thawa! It struck a match in my brain. The leader of the DPRES! The Dead People Revenge-Easy Society! He tried to kill me a year ago, when, I, accidently killed him! Now, he was impossible to kill.

“Mmmm…Bell,” he cackled. “I can finally kill you now.”

I screamed. Dead people, decomposed body parts, and rotting flesh climbed out of their graves.

“Uh huh, so you see, this is my army! They all want you to die, just like them,” he explained.

I froze. My phobia! I began to tremble.

Blood began to trickle slowly down the graves. It took me a moment to realise that it was my blood!

Something overhead caught my attention. The stars.

I stared up in horror as the stars moved to make a picture. It was a skull!

I couldn’t take it anymore. At that second, I turned into a tornado. I mean literally.

The zombie screamed like babies and girls and ran out of the way.

I was shocked. This never happened before!

Using my will power, I steered myself towards my dorm.

But, they don’t let me go easily. The mist around me turned into fresh blood. They pierced me like acid rain. Leaves from trees dropped off, as if they were knives!

I ran into my room. And slammed the door. I would never have Astronomy class ever again.